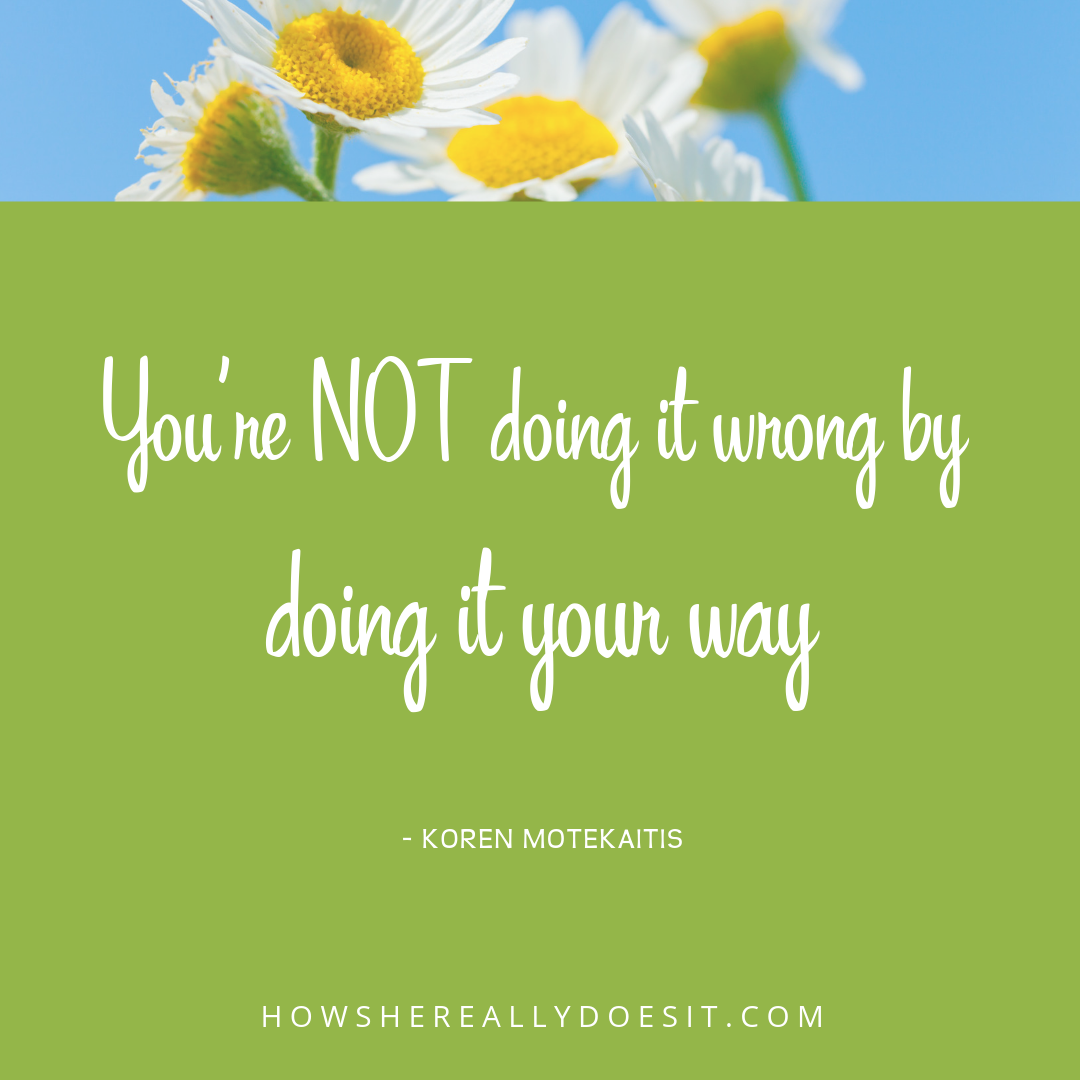 There’s a voice inside you that you disregard.

Instead of listening to your own voice, you listen to the voices of others … people you may not even know. Then you tell yourself — because your voice is different than the others — “you’re doing it wrong.”

STOP DOING THAT (I say this with lots of love + compassion).

You’re NOT doing it wrong by doing it your way.

I spent decades seeking out other people’s opinions and never listening to my own voice. I didn’t trust it. I didn’t think much of it. I thought others knew so much more (and better) than me.

The problem with this kind of thinking is that it eventually turns into the ultimate shame storm.

I stopped listening to me.

Which created even more distrust of my own opinion.

Which lead to more self-hatred.

Over time, I taught myself that other people knew better than I did. I stopped valuing me.

When I was 11 years old, I heard the fights my parents had about money. The uncertainty. The fear of not knowing how they were going to pay the bills and keep a roof over our head (which, by the way, they lost when I was 12 years old).

At 11, I made a deal with myself. I would grow up and become a lawyer and make a lot of money.

I wanted security. I wanted guarantees. I wanted to be safe.

Fast forward to my 20s. I was on the fast track. I was head coach at a college at 22 and was shortly after offered a tenured track coaching/teaching position.

And I didn’t have to be a lawyer.  Yippee skippee!

But that little voice inside of me hated my job. This was not what I really wanted.

The other voice in the back of my head told me this is as good as it gets. You”ll have a lifetime of security, pension, and benefits.

After 10 more years of living in the swampland and asking for other people’s opinion about what I should do, I finally, bravely listened to my own voice.

I resigned from my job.

Then I went around and took polls from everyone I knew.

I believed they had the answers and my own opinion and beliefs did not count.

Many people in my life thought I was crazy to leave such a safe, secure job. Especially since we were in the middle of a recession.

This didn’t lead to action, instead it lead to hiding, more fear and huge shame storms.

I figured something was wrong with me, because I couldn’t just “suck it up and stick with this amazing job.” Remember, I had already left it, but was now living in the swampland of shame.

I beat myself up and told myself I’d done it all wrong.

Again, no forward movement here, instead only more self-hatred and shame.

This shame storm had to stop … if I wanted to move forward in my life.

There were many small steps that eventually lead to finding my own personal power again … of listening to my own voice, instead of the voice of others who told me “Koren, you’re doing it wrong.”

When I started to hear my own voice again, I realized, actually remembered again, there is not ONE right way. I was not doing it wrong.

There are many ways to live this beautiful thing we call life.

It’s up to me, to go inside and listen. Go out in my life and do it while being willing to fall down and get back up as I create the life that works for me, instead of the life I am supposed to live according to others.

Had enough of the shame storms, the self-hatred, and the disrespecting of your voice? It’s time for that small voice inside you to speak boldly again, to lead you where you truly want to go …