A while back I wrote about wanting to be a person who read The New Yorker…but that I really wanted to read People magazine.

I gave myself permission to get a subscription to People magazine.

It’s been a fascinating experiment.

At first I was so excited when it came in the mail.

But it quickly wore off.

There’s something about the scarcity of People magazine that made it more tantalizing.

Also it was a bit of a forbidden fruit…because I was supposed to be a person who read The New Yorker…not People.

No longer was I sneaking in quick readings at my dental appointments or standing in line at the grocery store.

Instead I had plenty of access to read these magazines as they were now in my house.

Well, they lost their charm.

They’re piled up in stacks around my home.

I’m now viewing them as a burden…one more thing to do. (Yes, I realize I need to change that story.)

When something is perceived as scarce and a forbidden fruit, the desire to obtain it goes up.

When no longer scarce or forbidden, the reality begins to lack enjoyment.

This was a demonstration of practicing self-compassion.

P.S. Have you tried the Mindset Journal yet? 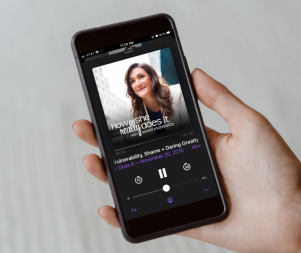